ADUs are compelling projects that offer not only parking, but also additional storage and beautifully finished new living spaces

We've maximized every inch of available space in this layout. We can store more than just a couple of cars, a few bikes, and a variety of yard equipment. We can move stored items from the house to the ADU, giving us the option to convert unfinished storage space into new living space.  We've also aligned the ADU with the character of the neighborhood and our own aesthetics, and at a budget we could manage.

​We got all of that with this project, and we are thrilled!

We love working with past clients on subsequent projects. We have a great sense for what they like, how they think, and the best way to communicate design ideas and project priorities. Such was the case on this project [the homeowners are some of the favorites we've worked with!] so we were able to hit the ground running.

Originally conceived of as a long-term residence for out-of-town family, the project originally included a bedroom, living room, bathroom, and kitchenette - a significant project.

To highlight this point, we describe ADUs to clients as a small house, not a large garage. The associated costs reflect this distinction. Not only do you have to build and finish the spaces, but you need to connect water, sewer, and electrical lines back to the main house.

​ADU's are not casual efforts.

So, over time the project scope evolved to become a 2-car garage with an attached storage shed and a upper level that can be used for a variety of purposes.

PRIME CONSIDERATION One of the most important elevations to consider in an ADU is the one that faces the house. Afterall, this is a larger structure and will take up a significant section of the backyard, so it better look good from the house!
So what exactly is an ADU?
An accessory dwelling unit – also known as a “granny flat,” “mother-in-law apartment” or “carriage house” – is a self-contained living unit that can be located within the walls of an existing or newly constructed home. It can also be an addition to an existing home, or a free-standing structure on the same lot as the main house.

Most commonly, we've seen a free-standing garage with living space above. 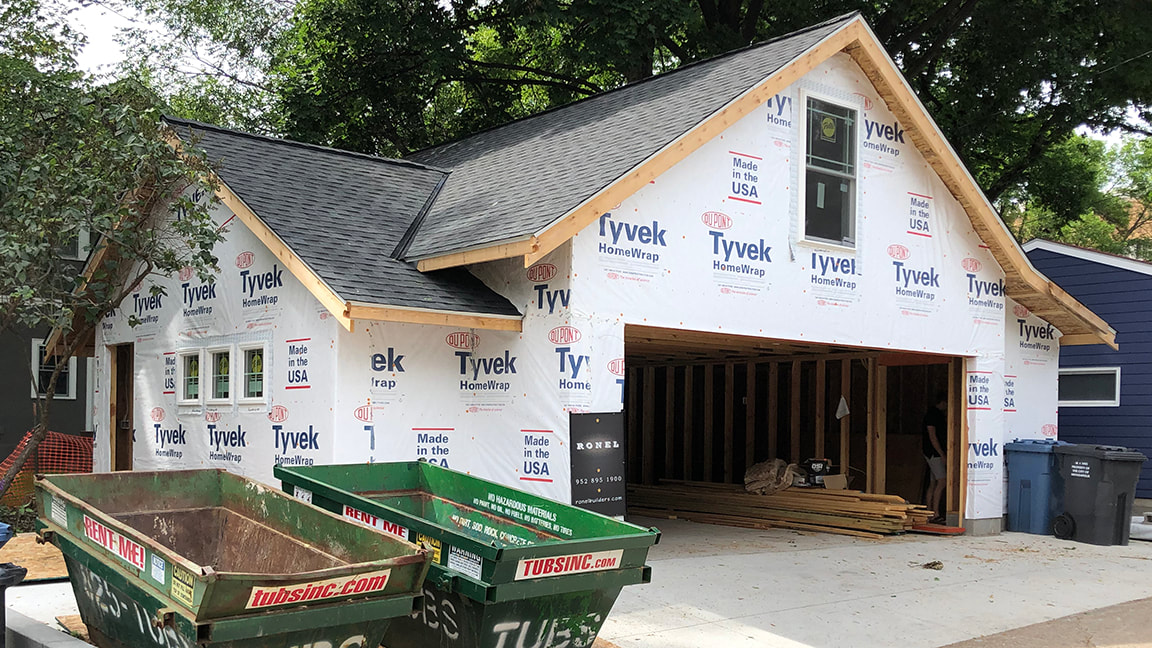 FROM THE ALLEY GIven an ADU's large footprint, it can gobble up a big portion of the backyard. To minimize this, we commonly locate the ADU as close to the alley as possible with the garage door opening directly onto the alley. This reduces the driveway length (you'll thank us in the winter) and maintains more backyard green space.
Internal Circulation
A primary design consideration is the location of the stairs. Do they run up the outside of the ADU, or are they internal, which hides them, but reduces both parking and storage space. Here, we kept the stairs internal with a straight run, and gave them their own entrance, which makes it much easier to haul large items up and down the stairs.
​
> See another family's take on the popular ADU

​Large-item storage, man cave, kids' play space, or perhaps a future rental suite, the upper level is a flexible space whose use over time will change. But whatever its role, this project offers much needed storage, living flexibility, and is a charming, final piece to a master plan developed over six years ago.